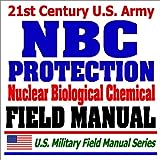 This is the latest edition of an important U.S. Army and U.S. Marines field manual (FM) covering the use of protective gear, test equipment, and existing structures by soldiers in the field to protect against nuclear, biological, and chemical weapons threats.

In the preface, it states:

“FM 3-4 is the US Army’s primary doctrinal reference on nuclear, biological, and chemical (NBC) protection and individual, collective, and force protection against NBC hazards. Individual protection refers to specific actions taken by soldiers to protect themselves against NBC hazards. It includes protection provided to the individual in an NBC environment by protective clothing and/or personal equipment. Collective protection provides relief from individual protective clothing to a group of soldiers. Force protection includes actions taken by commands to reduce their force vulnerability to NBC hazards. Chapter 1, Individual Protective Equipment. This chapter addresses individual NBC protective equipment and equipment-specific doctrine. Chapter 2, MOPP Analysis. At battalion level and below, commanders and staffs must still determine appropriate levels of force protection. At this level, however, a simplified procedure is required. We call this simplified procedure MOPP analysis. MOPP analysis is a process conducted by small unit leaders, battalion level and below, that determine the level of protection to be used by their soldiers. Other decisions regarding subjects such as alarm placement and automatic masking criteria will be required to conduct this analysis. At the small unit level, this MOPP analysis constitutes that unit’s chemical vulnerability assessment. Chapter 3, Chemical Vulnerability Assessment and Force Protection. Commands determine appropriate levels of force protection by integrating NBC considerations into their decision-making process. This process begins with an estimate of the likely be faced by the force. Chapter 4, Nuclear Protection. This chapter addresses actions required to protect soldiers from the effects of nuclear weapons. It discusses actions to be taken before, during, and after the attack, as well as a discussion of nuclear effects in special environments. Chapter 5, Biological Protection. This chapter addresses actions required to protect soldiers from the effects of biological weapons. It covers actions taken before and during a biological agent attack and covers biological weapons effects in special environments. Chapter 6, Collective Protection. This chapter covers all equipment currently available for collective protection as well as potential field expedients. It provides doctrine for collective protection planning, operation of collective protection systems, and entry/exit procedures. NBC contamination avoidance and decontamination doctrine are closely related to protection doctrine. Therefore, an understanding of FM 3-3 and FM 3-5 is required to understand this publication.”

Some highlights of the contents:

“NBC weapons are among the most hazardous on the battlefield. The doctrine of many potential enemies calls for their wartime employment of NBC weapons. In order to deter an enemy from exercising this option, US forces must be continuously prepared to fight and win under NBC conditions. To fight and win under NBC conditions requires an application of the three fundamentals of NBC defense-contamination avoidance, protection, and decontamination, at all levels of command, coupled with an effective retaliatory response. The first fundamental of NBC defense is avoidance. Avoidance addresses individual and/or unit measures taken to avoid or minimize NBC attacks and reduce the effects of NBC hazards. By taking measures to avoid the effects of NBC attacks, units can reduce their protective postures and decrease the likelihood and extent of decontamination required. The second fundamental of NBC defense is NBC protection. Protection is one of the four dynamics of combat power and consists of two primary components: actions to counter the enemies firepower and actions to maintain the health and morale of soldiers. NBC protection encompasses both of these components. Its goal is the conservation of the fighting potential of the force so that it can be applied at the decisive time and place. We divide NBC protection into three broad areas-force, collective, and individual protection.”

It is fully illustrated with numerous line drawings.