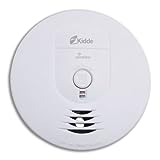 The Kidde 0919-9999 Battery-Operated Wireless Smoke Alarm allows for the easy installation of an interconnected smoke alarm system without the high cost and hassle of rewiring your home. The alarms are wirelessly linked so that when one alarm is triggered, all alarms will sound. This alarm can also be placed in a detached workshop or shed and linked into the home’s interconnected system.

Experts recommend interconnected alarms, because when one sounds, they all sound, providing an early warning against fire by dramatically increasing your ability to hear an alarm anywhere in your home, regardless of where the fire starts. Newer homes are required by code to have interconnected alarms. Wireless technology now enables any home to have an interconnected system.

Choose the Right Wireless Alarms for Your Home
Kidde offers two wireless product options: a Battery Powered Smoke Alarm, and an AC Powered Smoke Alarm. These products enable you to customize your system based on your specific needs. Read below to see which Kidde wireless smoke alarms are best for your home.

Getting Started with Wireless Interconnect in Three Easy Steps

Step 1 - Determine the type of smoke alarms currently installed in your house.

1. Battery Powered
No wires; runs only on batteries.

Most older homes have battery-powered smoke alarms. These alarms have no protruding wires and are battery powered.

2. Hardwired
Runs on your home’s electricity and may have battery backup. Only one alarm sounds when test button is pressed.
If your home was built in the last 20 years, you probably have hardwired smoke alarms. If only the alarm that you test sounds, then you do not have an interconnected system.

Step 2 - Decide how many alarms you need in your home.

The NFPA recommends at least one smoke alarm on every level of the home and in every sleeping area.

Step 3 - Based on your home’s current alarm set-up, decide which Kidde Wireless alarms to purchase.

2. If your home has only hardwired smoke alarms:
Purchase enough Kidde Wireless AC Powered Smoke Alarms (1279-9999) to replace all of your current smoke alarms. You will also have the ability to add Kidde Wireless Battery Powered Alarms in additional rooms for expanded coverage.

3. If your home has interconnected smoke alarms:
Purchase one Kidde Wireless AC Powered Smoke Alarms to replace one current smoke alarm. Kidde Wireless Battery Powered Alarms can then be installed in additional rooms.

Interconnectable for Improved Safety
Fire and consumer experts recommend interconnected alarms for added protection. According to the National Fire Protection Association (NFPA), most Americans feel they are more at risk of being a victim of a tornado than of a house fire. Actually the opposite is true. Fires are more common than any other disaster that strikes a family at home, and can become deadly in minutes.

You have on average less than three minutes from the time you hear a smoke alarm to escape a fire. The sooner you hear an alarm, the sooner you can get out safely. Smoke alarms that link together so that when one goes off, they all go off, are called interconnected alarms. These alarms provide more warnings in more places, giving your family more time to escape a house fire. Houses built after 1993 are required by building codes to have interconnected alarms that are wired into their electrical system.

Trademarked Hush Feature for Convenience
By pressing the Hush button, you can easily and safely silence nuisance alarms caused by non-emergency situations, such as overcooked dinners.

This alarm’s Smart Hush feature has the capability of temporarily desensitizing the alarm circuit for up to 8 minutes. This feature is to be used only when a known alarm condition, such as smoke from cooking, activates the alarm. The smoke alarm is desensitized by pushing the Test/Hush button on the smoke alarm cover. If the smoke is not too dense, the alarm will silence immediately. The red LED will illuminate for 1.5 seconds every 8 seconds while in hush. This indicates that the alarm is in a temporarily desensitized condition. The smoke alarm will automatically reset after approximately 8 minutes and sound the alarm if particles of combustion are still present. Smart Hush can be used repeatedly until the air has been cleared of the condition causing the alarm. Pushing the Test/Hush button on the alarm will end the hush period.

3-AA Batteries, Indicator LED, and Test Feature
Because a smoke alarm only helps protect you if it’s working, this unit features a red LED that flashes every 10 seconds to indicate that it is operating correctly. For additional peace of mind, the alarm also contains a test/reset button that enables you to periodically test its circuitry and horn.

The alarm’s 3-AA batteries provide continuous protection against smoke and fire hazards, even during power outages. The unit offers a low battery warning that issues a brief chirp every 30 to 40 seconds for at least seven days before losing power, letting you know that it’s time to change the battery.

This alarm is UL listed, so you can be confident of its quality, and it is backed by a 10-year limited warranty that lasts the life of the alarm.

Kidde is a UTC Fire & Security brand, with a history that’s rich with innovations, from the patent of the Chubb Detector Lock in 1818 to the development of the world’s first wireless networked smoke detectors in 2004.

What’s in the Box
One 0919-9999 smoke alarm with mounting bracket and mounting hardware, 3- AA batteries, a 10-year limited warranty and a bilingual user’s manual.